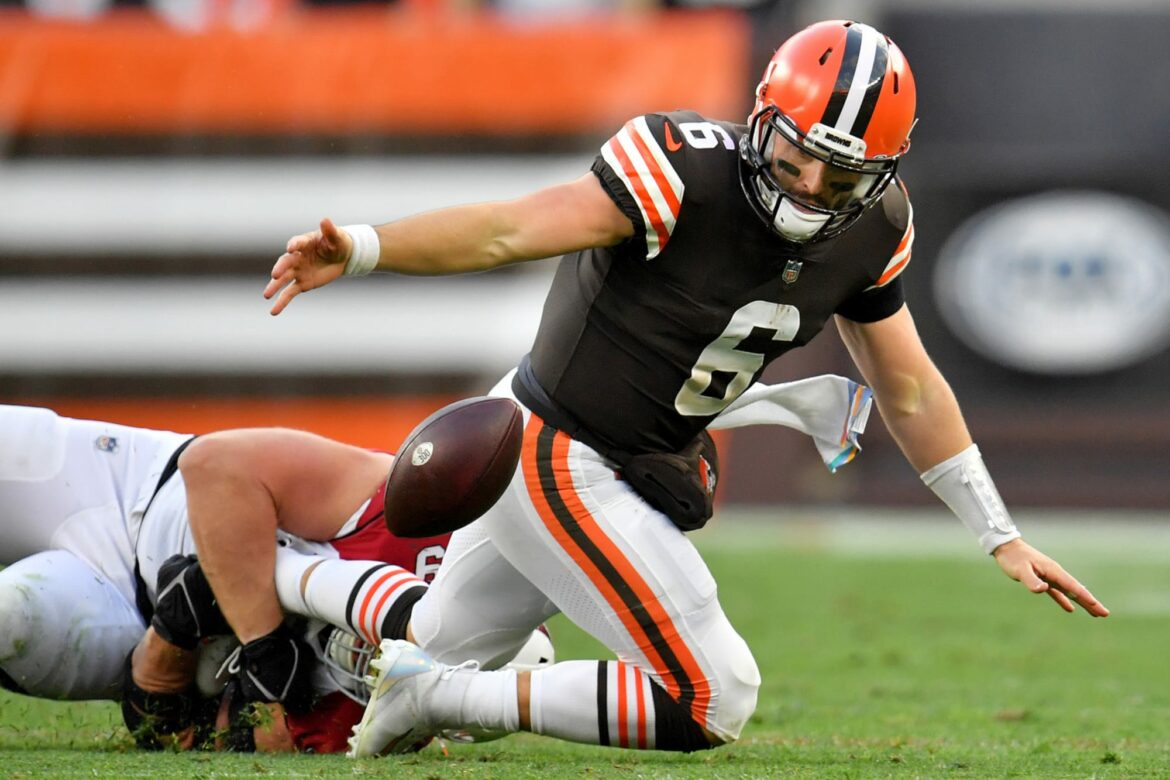 CLEVELAND, OHIO – OCTOBER 17: Baker Mayfield #6 of the Cleveland Browns fumbles the ball after a tackle from J.J. Watt #99 of the Arizona Cardinals during the third quarter at FirstEnergy Stadium on October 17, 2021 in Cleveland, Ohio. (Photo by Jason Miller/Getty Images)

Cleveland Browns quarterback Baker Mayfield revealed that he tore his labrum after Week 2 and he’s been playing through the pain.

No one will ever be able to question the toughness of Cleveland Browns quarterback Baker Mayfield. Despite the Browns being inconsistent this year and falling to 3-3 after the loss to Arizona in Week 6, Mayfield has been playing through serious pain to try and keep the offense rocking.

While it had been reported Mayfield had been playing with a dislocated left shoulder, the signal-caller revealed he fully tore his labrum in Week 2. Despite that, he’s still planning to keep playing, including this Thursday against Denver.

#Browns QB Baker Mayfield says he still expects to play Thursday night vs. Denver. He drops some news and adds that his labrum was *fully torn* after Week 2.

“Only I know how my body feels. It’s my decision. I get to say whether I play or not and that’s how it is.”

Mayfield really is adamant that he’s not going to let his injury prevent him from playing. He’s clearly got a sour taste in his mouth after the team was dominated against Arizona over the weekend. Mayfield is now ready to try and make plenty of plays in primetime against the Broncos.

Having said that, Mayfield’s injury isn’t the only one head coach Kevin Stefanski has to worry about. Both running backs Kareem Hunt and Nick Chubb are dealing with calf injuries. Hunt is expected to miss several weeks. As for Chubb, he was out in Week 6 and it’s up in the air if he’ll return to face Denver.

If Chubb can’t go, that will only complicate things even more for Mayfield. On the year, Mayfield has thrown for 1,474 yards, but only six touchdowns. That number has him tied for 24th in the league.

Come Thursday, Mayfield will hope to put on a show against a tough Denver defense. He’ll be doing so pretty banged up, but that’s not going to stop him from giving it his all.