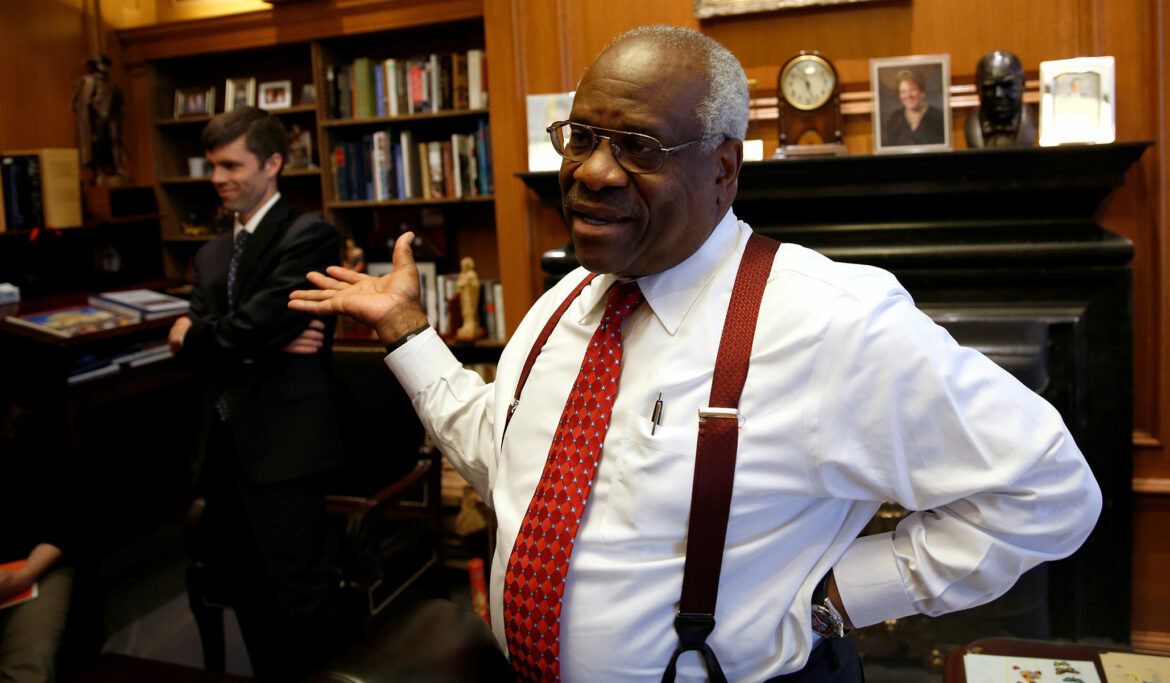 Supreme Court Justice Clarence Thomas talks in his chambers at the U.S. Supreme Court in Washington, D.C., in 2016. (Jonathan Ernst/Reuters)

Thirty years after joining the Supreme Court, Justice Thomas continues to champion the preservation of principle and liberty in American law.

Today marks 30 years since Justice Clarence Thomas joined the United States Supreme Court. His arrival at the Court prompted a renewed focus on the constitutional first principles that form a bedrock safeguarding individual liberty: adherence to the original meaning of the constitutional text, rigorous application of the rule of law, and an emphasis on our federalist system.

Through his extensive writings from the bench — he often knocks out more pages than any other justice each term — Justice Thomas has set forth the originalist meaning of numerous constitutional provisions. His legacy covers numerous substantive areas of the law, and its significant impact was highlighted this week by the array of jurists and practitioners who joined the C. Boyden Gray Center for the Study of the Administrative State and the Heritage Foundation for a daylong symposium expounding on its various aspects. Participants including eight federal judges, two former solicitors general, and numerous law-firm partners and academics discussed Thomas’s mark on cases involving religious liberty, freedom of speech, the 14th Amendment, the doctrine of stare decisis as it relates to the weight of precedent and the judicial responsibility to interpret statutory text, and originalism. Senate minority leader Mitch McConnell joined the Gray Center and Heritage that same evening to discuss the justice’s imprint on American law.

The justice’s influence on the jurisprudential approach of his colleagues started in his first term and has vastly increased in significance over his decades of service. Within just several years of his confirmation to the Court, Justice Thomas had extensively articulated a limited, and influential, view of the historic scope of federal regulatory power available to the federal government under the commerce clause. He has written multiple lengthy opinions addressing limits on federal law’s power to preempt, or override, state law when the two come into potential conflict. His opinions have also addressed the reach of the establishment clause in religious-freedom cases and the scope of equal protection under the 14th Amendment; encouraged the Court to stop “discovering” substantive rights in the due-process clause and return to protecting the privileges and immunities of citizens enumerated by the Constitution and the 14th Amendment; and urged a rethinking of several aspects of First Amendment doctrine. Throughout, he has remained neutral in his application of the law, consistently valuing constitutional principle and rigor over policy outcomes.

Even before his public writings in these important areas of constitutional law, in his first few years on the bench Justice Thomas began circulating positions within the confines of the Court that significantly influenced the views of his fellow justices. As one of his clerks that first year, now a D.C. Circuit judge, recently recounted in a law-review symposium on his legacy, the public papers of Justice Harry Blackmun indicate that Justice Thomas started as the lone dissenting justice in at least two cases in which other justices later publicly joined his initial position.

That is a familiar pattern in Justice Thomas’s career: Time and again, he’s staked out stances that have subsequently persuaded colleagues and impacted the scope and reasoning of decisions in the lower federal courts. As a result, his influence has only grown as the years have passed. Today, with at least five conservative appointees sitting on the bench, the Court is poised to revisit key doctrinal areas such as the extent to which states can regulate abortion in accordance with the views and interests of their citizens, and the proper scope of the Second Amendment right of citizens to bear arms. Repeatedly over the years, Justice Thomas has encouraged his colleagues to grant review in Second Amendment cases, arguing that the rights the amendment protects are often undervalued by the judiciary in comparison with those of other individual rights. This term, the Court will do so.

Justice Thomas’s legacy is all the more remarkable when considered in light of the spare conditions of his upbringing. As those familiar with his autobiography, My Grandfather’s Son, will know, Justice Thomas grew up in the segregated south. Much of his childhood was spent in something close to poverty; his circumstances only improved once his grandfather took him and his brother in after a fire destroyed their home. This was a turning point in his life. His grandfather instilled in him deep values of faith, hard work, and determination — principles that guide him to this day and that he has sought to pass along to his law clerks and the scores of students he has taught in law-school classrooms over the years.

Just as much as his opinions and continued service, it is this influence as a mentor to generations of attorneys that will ultimately be Justice Thomas’s legacy. As the country recovers from a pandemic and faces a momentous term at the Court, his humility and steadfastness and his triumphs over adversity provide a tangible source of optimism for those who seek to preserve faith, family, principle, and liberty in American life.  Here’s to many more years of Justice Thomas sitting on the bench; the country is much better off for his service.

If you valued reading this article, please consider joining our fight by donating to our Fall Webathon. Your contribution makes it possible for us to continue our mission of speaking truth and defending conservative principles.

If you valued reading this article, please consider joining our fight by donating to our Fall Webathon.

Jennifer L. Mascott is an assistant professor of law and the co-executive director of the C. Boyden Gray Center for the Study of the Administrative State at George Mason University’s Antonin Scalia Law School.