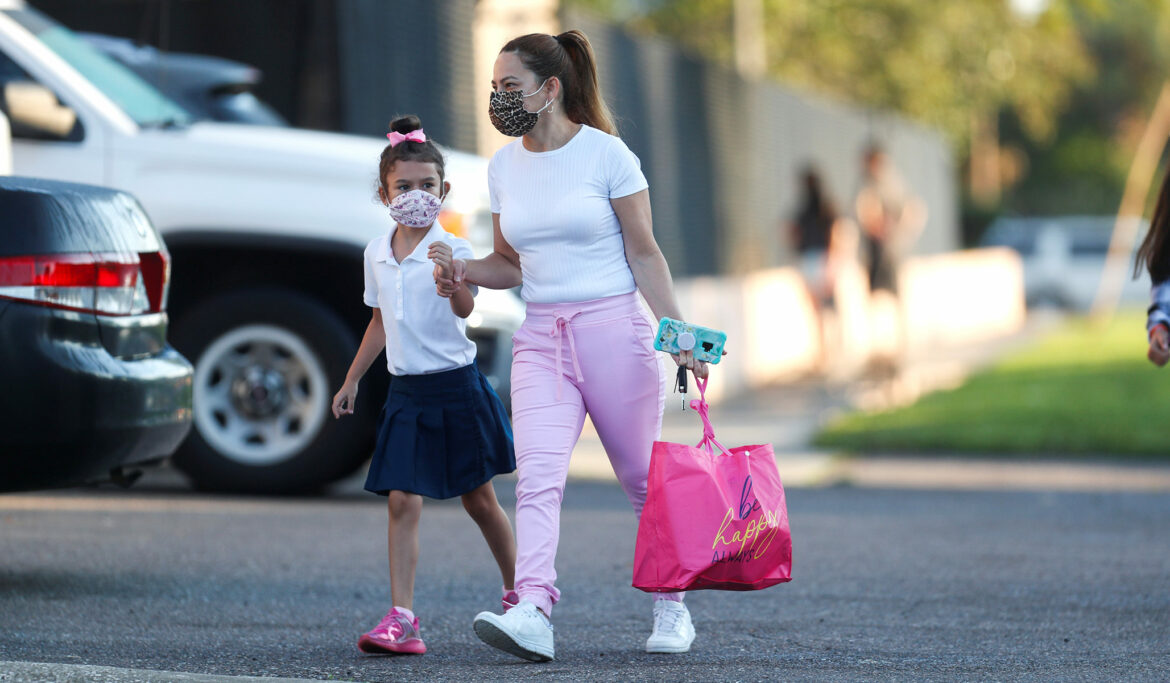 A mother walks her daughter on the first day of school amid the coronavirus pandemic at West Tampa Elementary School in Tampa, Fla., August 10, 2021. (Octavio Jones/Reuters)

The decision comes after a judge ruled last week that Governor Ron DeSantis had the authority to allow parents to opt-out of strict mandates. However, Miami-Dade superintendent Alberto Carvalho did not mention the ruling in his announcement, instead attributing the decision to falling COVID-19 cases and noting that the mandates could be reinstated if cases rise again.

“On the basis of current health conditions, which are dramatically improved, effective tomorrow parents can access the parent opt-out form from any elementary or K-8 school in Miami-Dade,” Carvalho said, according to the Associated Press.

Students who opt-out can stop wearing masks to school by Friday, the superintendent said at a news conference.

The decision comes after Carvalho lifted mask requirements for middle school and high school students earlier this month. At that time, he said he would allow elementary school students to opt-out as well if cases kept falling. Last week, three out of four schools in the district did not have any COVID-19 cases, Carvalho said.

Cases of COVID-19 in Florida have fallen from an average of 21,700 cases a day when the school year began in August to an average of 1,500 cases.

The shift brings both school districts in line with rules by the state’s health department that require districts to allow parents to decide whether their children wear masks. In July, DeSantis signed an executive order dictating that mask-wearing for children in public schools would be done at the discretion of parents. The state said it would withhold the salaries of administrators in districts that violated the directive.

The rule spent months in legal disputes and the Biden administration stepped in to offer compensation to at least one school district, Alachua County, that received fines over its mask mandate.