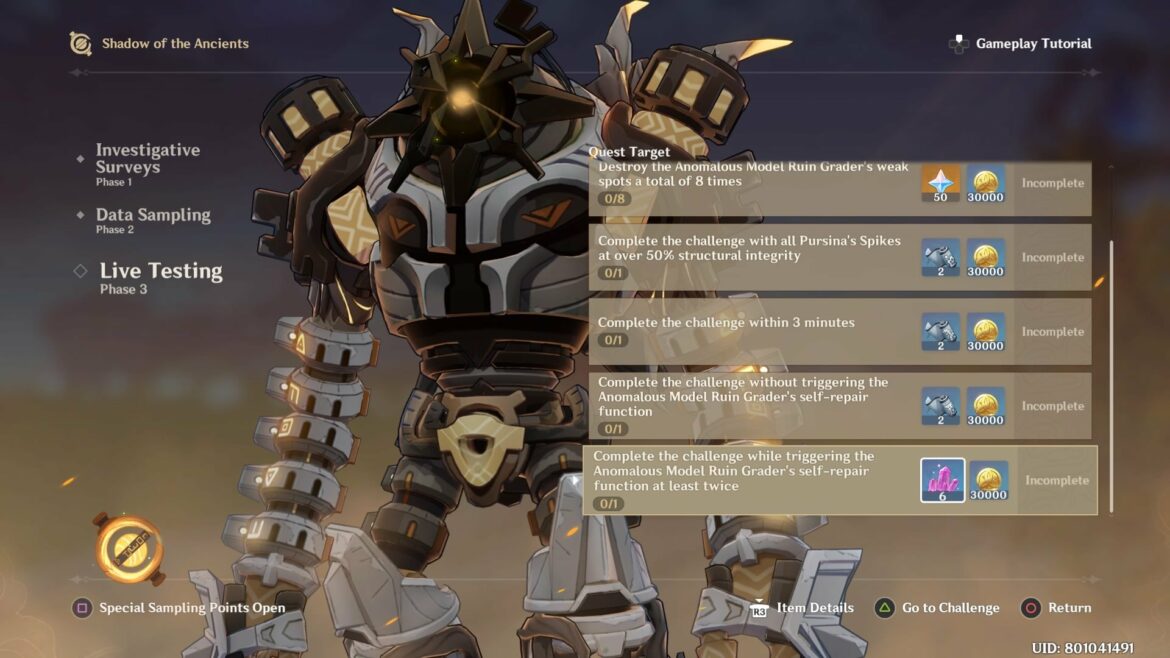 The final Phase of the Shadow of the Ancients Event in Genshin Impact Version 2.2 has started, pitting us in a challenge against a regenerative Ruin Grader, here are some tips to help.

First, keep in mind that in order to unlock Phase 3 of Shadow of the Ancients, you’ll need to have completed Phase 1 Investigative Surveys, and Phase 2 Data Sampling. Be sure to check our previous guide if you need some help.

After clearing Phase 1 and 2, you’ll unlock this final quest: Autonomous Mechanical Energy Source: Live Sample. After activating navigation through the Event menu, go speak back to Hosseini in Ritou. He’ll tell you to go to Tsurumi Island to place the tree Pursina’s Spikes.

Once you teleport to Tsurumi Island, where you first fought the Ruin Grader, you’ll be asked to place the Pursina’s Spikes. It works the same way as in Phase 1. You need to use the Ayesha’s Chaos Prospectors gadget to find three suitable locations:

Once you’re done, go back speak to Hosseini and you’ll unlock the Phase 3 challenge: Live Testing. This is the final showdown against the Anomalous Model Ruin Grader.

This is just like in Phase 2, you’ll need at least one Electro character to charge the Pursina’s Spikes. Once the three spikes are fully charged, the fight ends and it’s your victory. If any of the three spikes get destroyed, you will fail the challenge.

Here’s the list of achievements. You need to focus on completing “Destroy the Anomalous Model Ruin Grader’s weak points 8 times”. That’s the most important achievement, besides clearing the event once. Because Primogems are the rewards. As a reminder, its weak points are on its legs. They get exposed when it does its laser attack.

You’ll need to do the fight at least three times to get all the rewards. The hardest achievement is definitely “complete the challenge with all Pursina’s Spikes at over 50% structural integrity (HP).” To clear this, you need to be careful and stun the Ruin Grader right before it tries to attack one of the spikes.

Remember you can eat food, this isn’t a rogue-lite event like Labyrinth warriors. Get your food buffs before the battle. Like with Ruin Guards, you can also stun the Ruin Grader when shooting its eye, but only when it’s glowing.I definitely reccomend using both Cryo and Hydro characters so you can freeze the Ruin Grader regularly during the battle. Electro, Cryo and Hydro, that’s 3 party members. For your fourth, pick what works best: another DMG dealer, an Anemo character to crowd control the mobs, etcKeep in mind all the other achievements’ rewards aren’t Primos. So while it’s nice to clear them for free materials, if you can’t do it don’t beat yourself over it.

Genshin Impact Version 2.3 will be launching on November 24 with new playable characters Arataki Itto and Gorou. Albedo was also leaked to be the banner rerun seeing he’ll be featured in the main event of the update: it’s the sequel to the 1.2 Dragonspine event. We’ll know for sure with the 2.3 livestream happening soon. You can always reach me on Twitter to ask me about Genshin @A_iyane07.