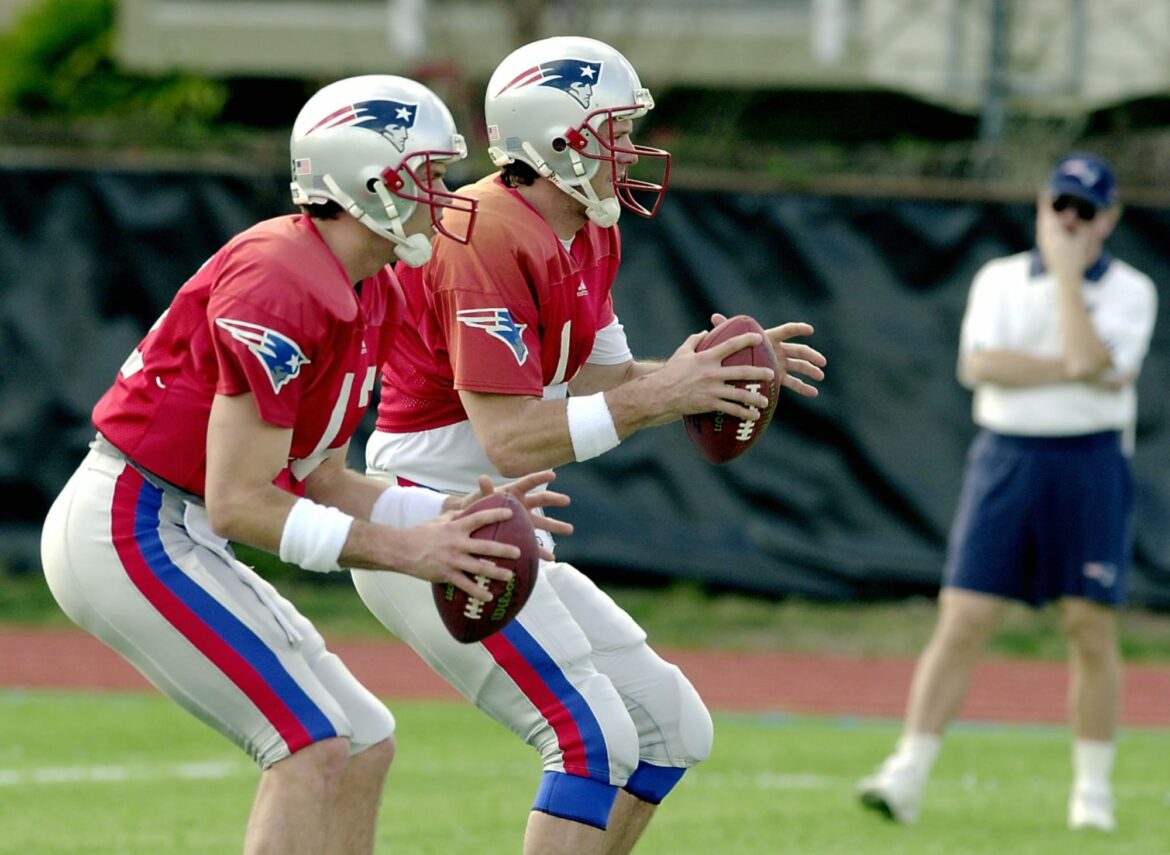 Since Tom Brady took over for an injured Drew Bledsoe, he’s been on top of the football world. But what about the kids who grew up idolizing Bledsoe?

On the afternoon of Sep. 23, 2001, Mo Lewis delivered a hit that altered the course of professional football.

It was late in the game, five minutes left in the fourth quarter, and New England Patriots quarterback Drew Bledsoe was scrambling, trying to lead his team down the field to potentially tie the game at 10 apiece.

He even pulled up at one point midway through his scramble, heading toward the sideline and almost acquiescing to one of the principal rules of playing quarterback: protect yourself, live to play another down.

Rather, the Pats’ franchise quarterback trudged forward, hoping to get a few more yards, hoping to reach the first down marker, hoping to make a play. It was there, right at the sticks, Bledsoe was met by Mo Lewis, who bodied the sturdy quarterback, sending him hard into the ground at Foxboro Stadium.

And though Drew Bledsoe returned for the next series, he was replaced on the teams’ final series by a young Tom Brady, who wrapped up the game going 5-for-10 for 46 yards.

Few paid attention at the time.

It was early in the season, late in the game, and, as Lower Manhattan still smoldered, many Americans were hardly focused on a 10-3 AFC East barnburner.

As we now know, Brady had a Pro Bowl season as he led the Pats to 11 wins, a division crown, and eventually a Super Bowl victory.

It would be his first of seven Super Bowl wins in 10 appearances, the beginning of a run of success unparalleled in professional football.

There have been stories written about the Mo Lewis play, oral histories told, entire segments of documentaries dedicated to the hit that not only changed Bledsoe and Brady’s lives, but changed the future of football itself.

But let’s rewind about a decade, back when Drew Bledsoe was taken by the New England Patriots with the first overall pick in the 1993 NFL draft and I was a 10-year-old boy on the Jersey Shore, newly obsessed with the chisel-jawed young quarterback with the Howitzer attached to his shoulder. 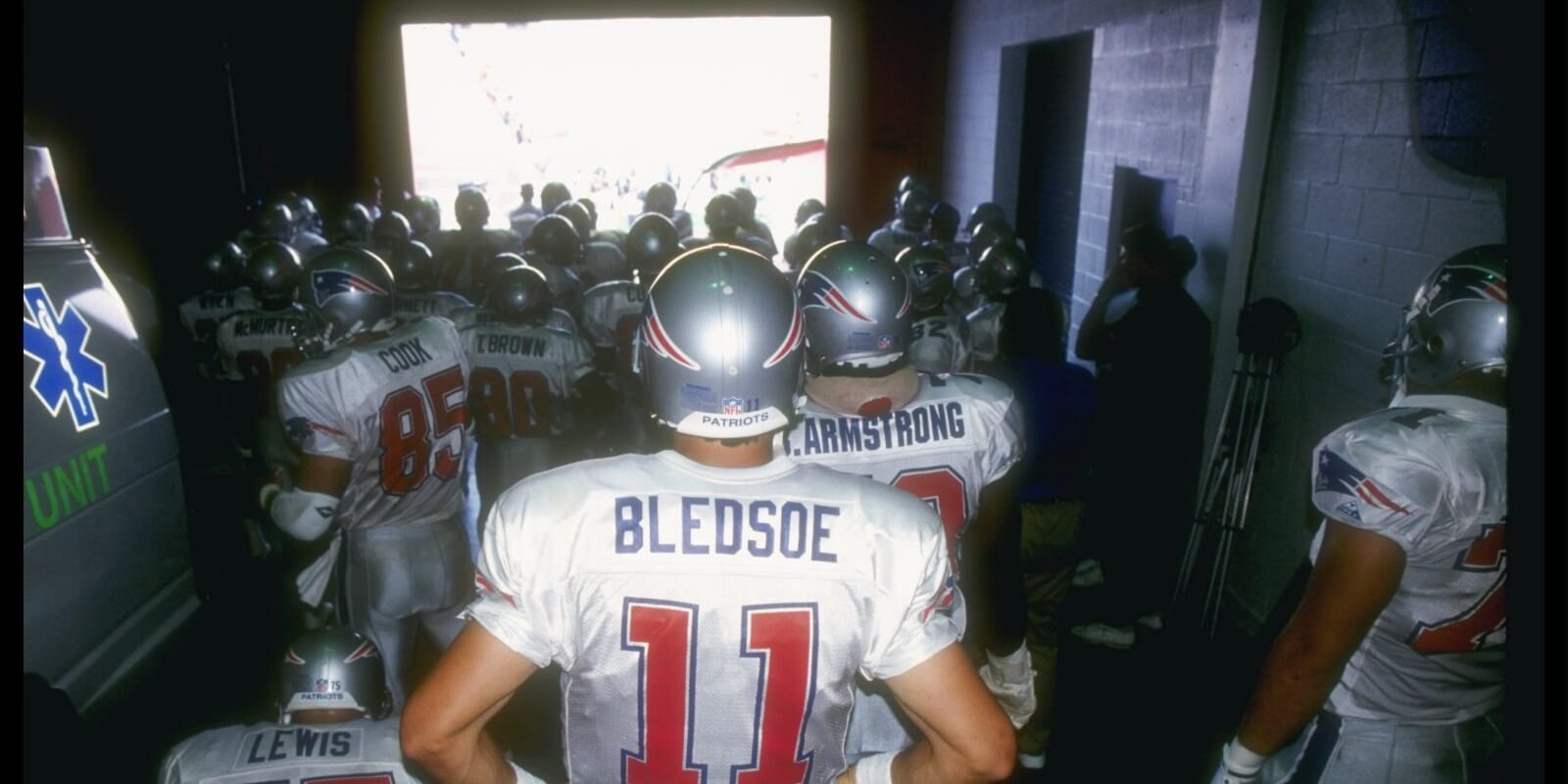 Before there was Tom Brady, Drew Bledsoe held the hopes and dreams of New England Patriots fans

I forget exactly where or how I was introduced to Drew Bledsoe in the first place.

At the time, I barely knew the New England Patriots had existed, as little did outside the purview of the New York Giants in our home. Maybe I’d tracked Bill Parcells from my beloved GMen to his new gig in Massachusetts and took note of the young quarterback he’d drafted.

Whatever it was, I became obsessed.

Like me, Bledsoe was tall and relatively immobile. I studied his dropback and his drop-elbow, not-quite-sidearm release, trying my best to emulate them in my backyard. If it worked for Drew, I thought, it would work for me, too.

Soon, my binder of NFL trading cards was overflowing with Bledsoe rookie cards. On my room’s toy shelf, my Phil Simms Starting Lineup figure was supplanted by a pair of Bledoes; one in his Pats’ red, white, and blue, the other in his Washington State maroon and white. Both sporting the gray helmets that were supposed to stand in for silver in the plastic and paint.

I wrote him letters, telling him how I wanted to someday play for the Washington State Cougars, neglecting the fact they likely didn’t do much recruiting on the Jersey Shore or that I probably wasn’t on track for a Division 1 scholarship.

A few months later on Christmas morning, I unwrapped a new Drew Bledsoe jersey, authentic, you know, with the numbers stitched on and everything. I fell asleep that night with it folded beside me in bed. 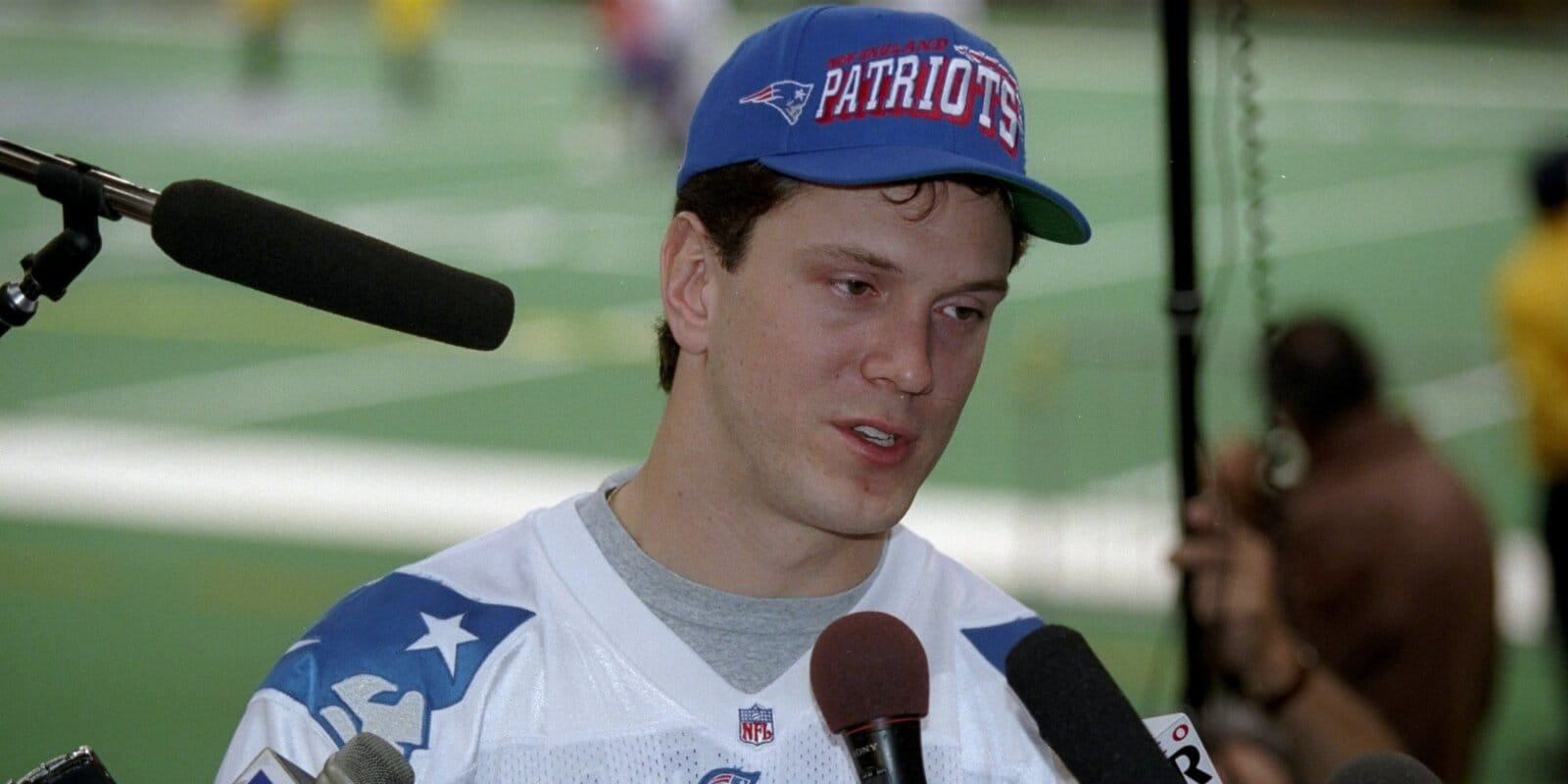 Throughout the mid-90s, Bledsoe’s Patriots and my New York Giants were on opposite trajectories.

While the Giants rotated through a string of failed quarterbacks, the Pats had their guy in Bledsoe. He led the league in passing in just his second year and made the Pro Bowl in three of his first five seasons.

The Patriots, with a roster featuring six Pro Bowlers (including Bledsoe) and two All-Pros, won 11 games and the AFC East and ran through the first two rounds of the playoffs outscoring their opponents 48-9.

Two weeks after the Pats punched their ticket to the franchise’s second-ever Super Bowl, I sat in front of my parents’ television, authentic Bledsoe jersey on beneath my Patriots Taz-and-Bugs Bunny sweatshirt (the one nearly every single kid in the 90s had) and watched Brett Favre’s Packers handle New England, the nail in the coffin coming via Desmond Howard’s then-record 99yard kickoff return touchdown.

But despite his borderline awful game (25-for-48 for 253 with 2 TDs and 4 picks, resulting in a meager 46.6 passer rating) Drew Bledsoe was still very much my hero.

After all, I was still just 13, the perfect age for a boy to be obsessed with a quarterback.

Over the next four years, though, things began to change.

My obsessions evolved from football players to punk rockers. Catches in the yard and three-on-three touch football games in the street became picking up ratty guitars and figuring out how to play songs by The Ramones and the Velvet Underground.

And then, of course, girls.

What little time I still had for football was refocused, as my brief dalliance as a part-time Patriots fan was supplanted by a full-blown return to my hometown Giants.

And though I always kept an eye on Drew Bledsoe as I waded through the murky and often confusing waters of high school, I was hardly the quarterback-obsessed little boy I had been. 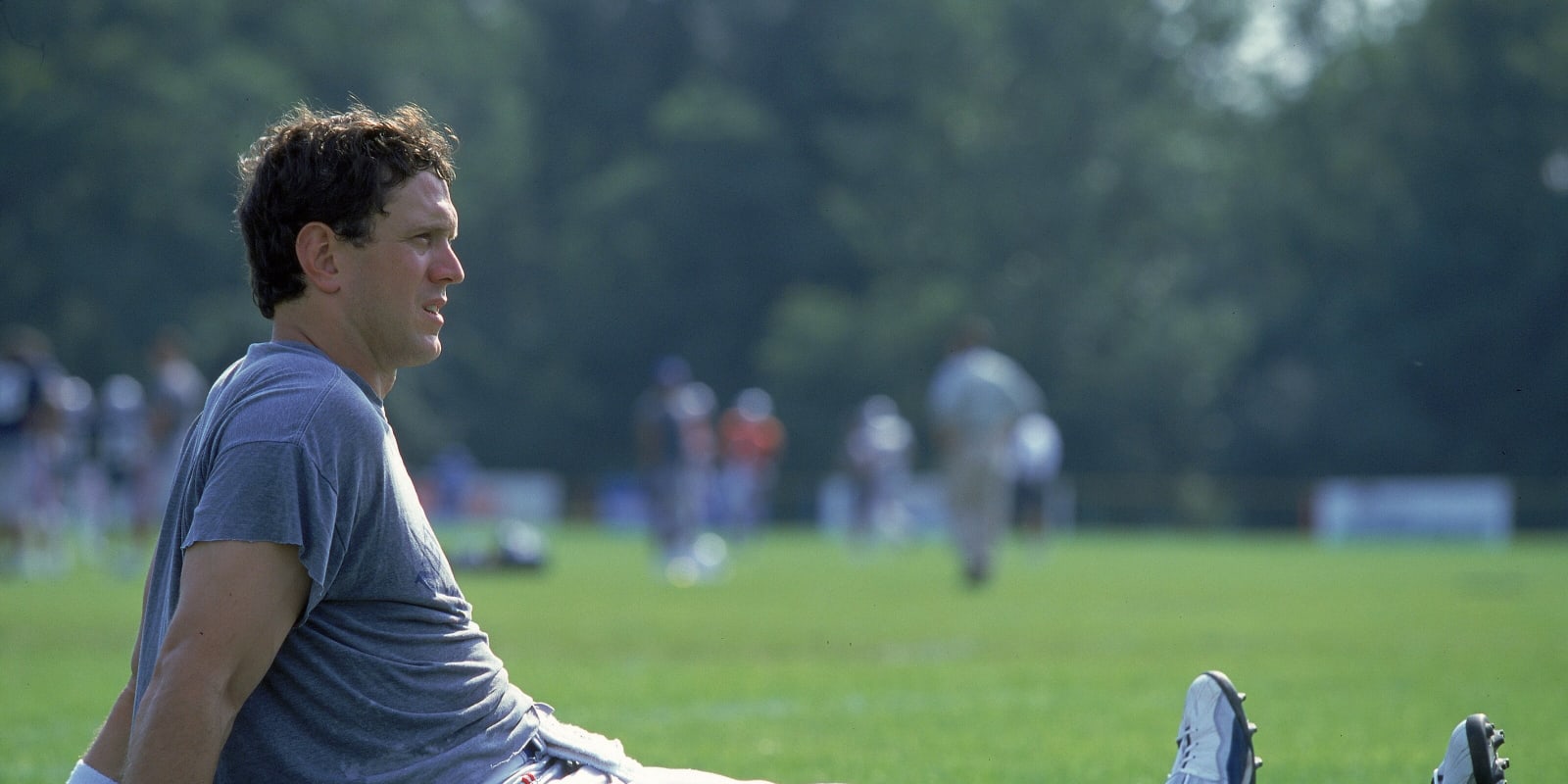 Sep. 23, 2001, was my third or fourth week of college at an art school in Philadelphia, a long way from the locker room at Washington State. I was living in a dorm room that had no television, though even if it did, it was unlikely an early-season Patriots/Jets game would be broadcast in Philly.

But just a few hours north, Tom Brady took the field, unceremoniously taking the first of countless snaps that would alter the course of football irrevocably. Of course, no one could know that at the time, least of all one of football’s most beautiful minds.

After the game, Bill Belichick said of Brady, “Tom has prepared hard and that is what a backup quarterback’s job is; to be ready when the opportunity arises.”

Meanwhile, Drew Bledsoe — despite taking over for an injured Brady in the AFC Championship game and leading the team he thought was rightfully his to their third Super Bowl — was shipped to the division-rival Bills shortly after the season ended.

In Buffalo, Bledsoe had a Pro Bowl season, throwing for more than 4,300 yards and 24 touchdowns, but was released in 2005 before reuniting with Parcells in Dallas. Until Drew Bledsoe retired in 2007, I’d get to watch him play my Giants at least twice a season.

But that night on the phone in late fall 2001, my father asked if I had heard about my boyhood hero.

“Took a big hit,” he said. “Apparently he’s in the hospital. Internal bleeding.”

I noticed almost immediately how little I cared.

Sure, there was concern for the well-being of another human being, that a person was in the hospital, bleeding inside from doing his job. But I gave little more than a shrug, hoping Drew would be okay.

After I hung up, my mind flashed back to just a few years prior, when such an incident would have rendered me a useless wreck, likely sobbing into my pillow beside a makeshift vigil for Drew in the corner of my bedroom that was very much dedicated to him.

But then, as a college freshman, on the uneasy precipice between young manhood and early adulthood, Drew Bledsoe was just another football player to me, one of a hundred chisel-jawed quarterbacks with a Howitzer attached to his shoulder.

And I had better things to attend to; punk rock, schoolwork, and, of course, girls.