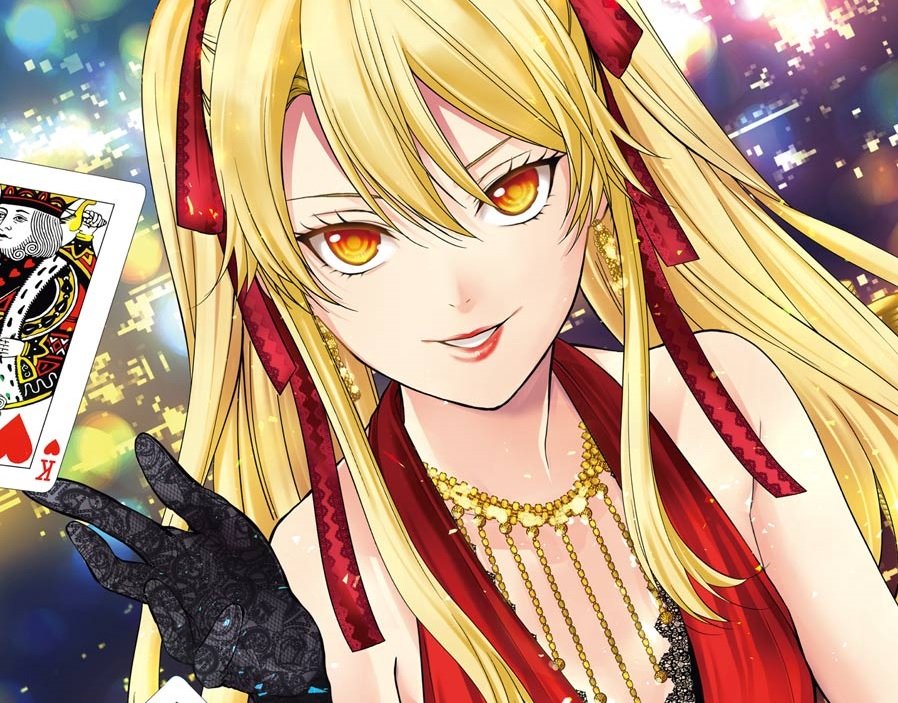 The original Kakegurui manga began in Gangan, Square Enix’ manga publishing arm, in 2014. Kakegurui‘s author is Homura Kawamoto, with art by Tooru Naomura. Who coined the series iconic thrilled gambling faces (or crazy lesbian faces as most fans call it). And they look much better in the manga than the anime.

Anyways, seeing Homura Kawamoto isn’t drawing his manga himself, he has enough time to be writing several spinoffs, and Kakegurui Twin is the first, started in 2015, and drawn by Kei Saiki.

Note that this story contains spoilers for Kakegurui.

MORE – Our review for SMT V

Kakegurui Twin takes place one year before the main manga, before protagonist Yumeko Jabami joined the school. The story focuses on Mary Saotome and her first days at the school.

In particular, Mary reunites with her childhood friend Tsuzura Hanatemari, who’s currently a pet. Most of the story has a yuri feel to it, focusing on the relationship between Tsuzura and Mary, and their growing trust between each other.

Most if not all of the characters in Twin don’t appear in the main manga. Because they’re third years, and graduated by the time Yumeko joins. In particular, there’s Sachiko Juraku, who could be considered the main overarching antagonist of the spinoff. She sometimes helps, sometimes hinders Mary, and is basically fond of her to the point of wanting to make her into her pet and break her. Besides Tsuzura, Mary also gathers other allies as she tries to survive in the school.

However, by the time the main manga begins, Mary is all alone. This implies something happened to her friendship with Tsuzura, and it’s one of the main mysteries of Twin.

Kakegurui Twin is the longest spinoff of the series, still ongoing now alongside the main series, with 12 volumes. Yen Press is localizing it in the USA, with 10 volumes out so far.

Kakegurui Twin will be released in August 2022 on Netflix. It’ll be a worldwide release. The main visual for the announcement feature Mary and Tsuzura.

Personally speaking, I believe both the main story and Kakegurui Twin are excellent. However, I’ve always felt that Mary’s screentime and actions in the main story have decreased past the opening arcs, since she got her own spinoff, which is a shame.