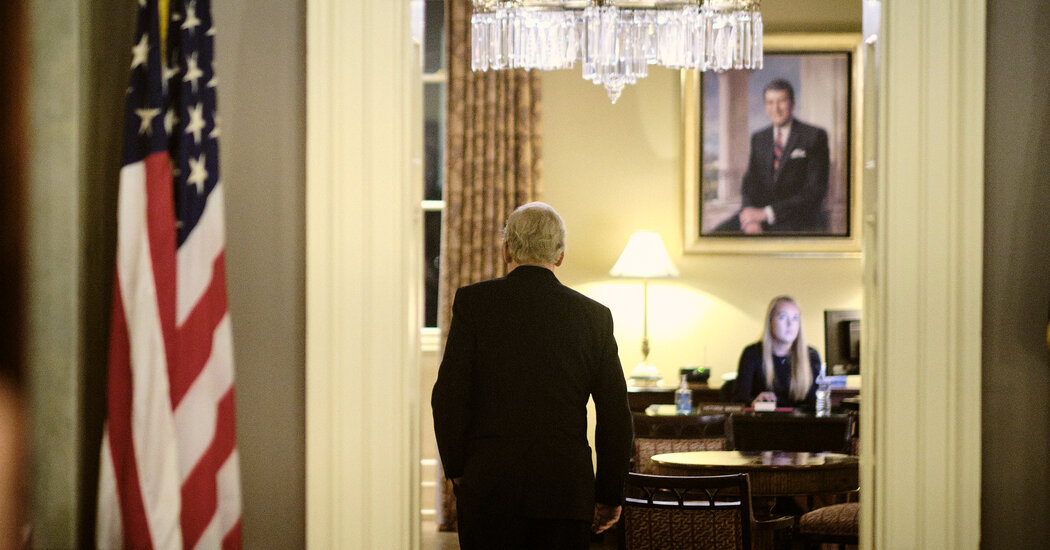 WASHINGTON — A day after dropping his party’s blockade and allowing action to temporarily increase the federal debt ceiling, Senator Mitch McConnell, the Republican leader, warned President Biden on Friday that he had no intention of doing so again, reviving the threat of a first-ever federal default in December.

In a phone call with Mr. Biden, Mr. McConnell, who toiled to corral the votes needed to break his own party’s filibuster against the debt limit increase — and voted himself to do so — said Democrats should not expect such help in the future, according to a Senate Republican aide briefed on the conversation.

“I will not be a party to any future effort to mitigate the consequences of Democratic mismanagement,” Mr. McConnell wrote in a scathing letter that the aide said restated what he had told the president during the call. “Your lieutenants on Capitol Hill now have the time they claimed they lacked to address the debt ceiling.”

The Senate passed a bill on Thursday to lift the statutory limit on federal borrowing by $480 billion, which the Treasury Department said would last until at least Dec. 3. Republicans opposed it en masse, but 11 of them, including Mr. McConnell, broke ranks to provide the 60 votes needed to advance it past a filibuster.

The measure is expected to clear the House next week, days before the Oct. 18 deadline when the Treasury Department said the government would no longer be able to borrow to finance its obligations under current law.

Mr. McConnell has come under withering criticism from former President Donald J. Trump and some of his Republican colleagues for agreeing to allow the debt limit increase to come to a vote, after insisting for weeks that his party would never do so. He did so under the mounting pressure of a looming government default and as Democrats coalesced around the idea of changing the filibuster rules to allow them to raise the borrowing limit unilaterally.

The letter, which the aide said he sent to all Republican senators, appeared intended at least in part to assuage the anger of his colleagues.

Mr. McConnell has insisted that Democrats use a complex and arcane budget process known as reconciliation to raise the debt limit, which would shield it from a filibuster and allow it to be passed without any Republican votes. Democrats, who are already using that process to advance a sprawling multitrillion-dollar domestic policy package, have refused, arguing that it would be too time-consuming and cumbersome.

The Republican leader argued that by allowing the short-term increase to move forward this week, he was calling Democrats’ bluff, offering them plenty of time to use reconciliation to enact a longer-term solution.

But several Republicans balked anyway, and party leaders were forced to spend hours scrounging for the votes. It was an awkward turn for Republicans, who had hoped to use the debt limit drama to score political points against Democrats but ended up bitterly divided themselves.

“I don’t understand why we are folding here,” Senator Lindsey Graham, Republican of South Carolina, said on Thursday. “This is just a mistake.”

Democrats pointed to Mr. McConnell’s move as evidence that Republicans could — and should — at least allow them to raise the debt limit through normal procedures.

In a speech on Thursday that angered many Republicans, Senator Chuck Schumer of New York, the majority leader, declared victory.

“Today’s vote is proof positive that the debt limit can be addressed without going through reconciliation process — just as Democrats have been saying for months,” Mr. Schumer said. “The solution is for Republicans to either join us in raising the debt limit, or stand out of the way and let Democrats address the debt limit ourselves.”

Mr. McConnell seized on Mr. Schumer’s comments in his letter, calling it a “partisan, angry and corrosive” speech and yet another reason to withhold Republican votes in the coming months.

“This childish behavior only further alienated the Republican members who helped facilitate this short-term patch,” Mr. McConnell wrote. “It has poisoned the well even further.”