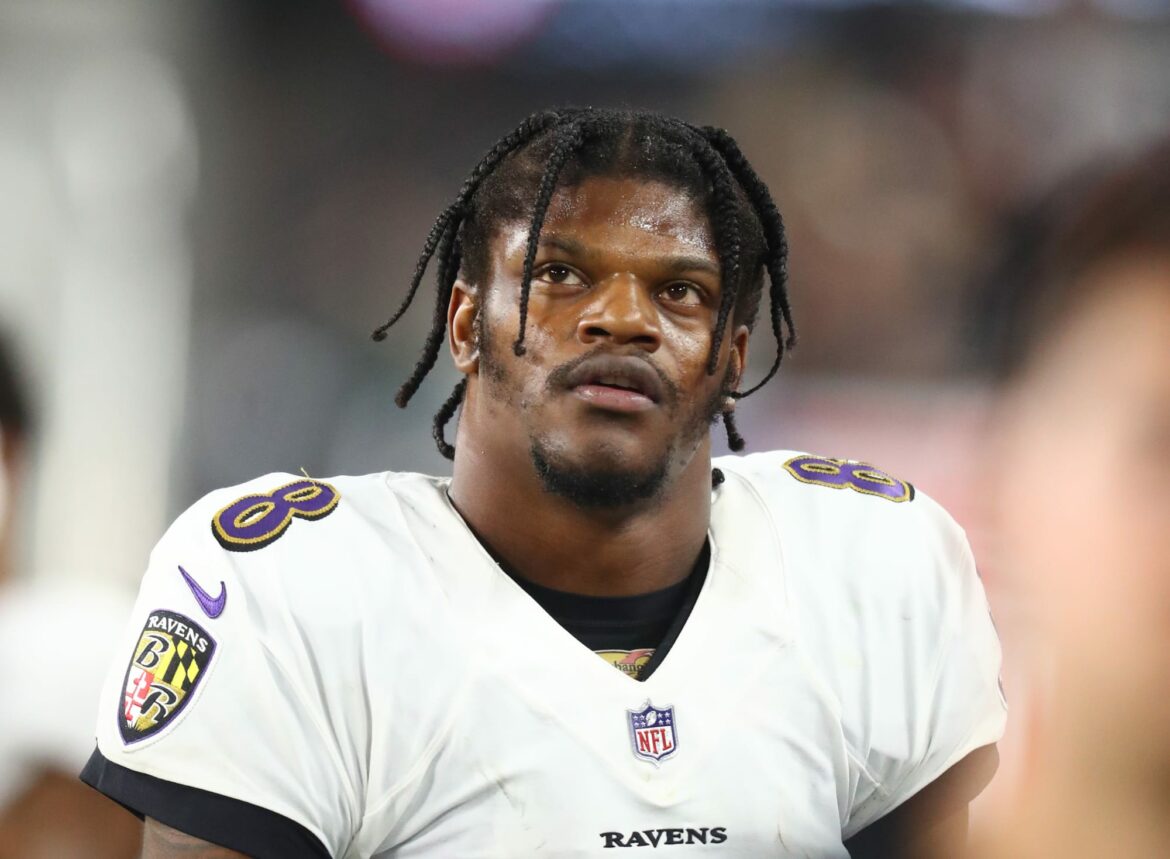 Baltimore Ravens quarterback Lamar Jackson is electric, but he hasn’t been rewarded with a mega-contract. Some inside the league have theories as to why.

Yet some league insiders believe the Ravens should be hesitant to offer a mega-extension.

While fans and teammates seem to adore Jackson, not everyone inside the NFL believes the Ravens would be smart to make Jackson one of the highest-paid quarterbacks in the league.

“Do you love Lamar as a player? As an organization, they’re pulling for him,” an NFC personnel executive tells FanSided, on the condition of anonymity to be able to speak freely. “They want to take care of him. They want to put him in a situation to be successful.

“But, they know there’s a ceiling to what he can do in the playoffs. You’ve seen it three years in a row … Are you going to pay that kind of premium for a franchise guy? A franchise guy is a guy who gets you to the Super Bowl. Lamar has one playoff win in three years, and he followed it up with a complete disaster the next week.”

With Jackson behind center, the Ravens are always going to be in the mix, but the question of whether Jackson can reach the ultimate game.

On Sunday night against arguably the most explosive team in the NFL, Jackson led a pair of touchdown drives to cap a fourth-quarter comeback that may have moved the needle toward making the 24-year-old the highest-paid player in franchise history.

But, after watching the Buffalo Bills stifle Jackson in the ’20 AFC Divisional round, forcing Jackson to make several errant throws en route to a 142-yard and one-interception performance, maybe the organization is right to take a cautious approach to Jackson’s future.

Likewise, Ravens general manager Eric DeCosta has to tread carefully given Jackson represents himself. With no agent as a buffer, negotiating any contract in-season is tough.

“It’s a unique, unique, unique situation,” the executive says. “As an organization, you don’t want to touch this thing during the season. Not even touch it. He’s his own agent, and that’s awful.

“The head coach is telling Lamar to focus on football, and telling the front office ‘don’t even touch him, I don’t give a shit if it is his uncle calling you, whoever close to him who is running this contract for him, don’t you dare pick up the phone.”

For Jackson, it might be as simple as finding a way to both stay healthy, having already danced on a razor’s edge with 510 rushing attempts through his first three-plus seasons … and finally delivering in the postseason.

“I don’t think he’s a franchise guy,” the executive admits. “Because he’s going to get hurt. He has an arm, but his best attribute is running the football. That’s his go-to, and he is dynamic as a quarterback doing it, maybe the best ever.

“But he gets in the playoffs, because when you get to the postseason you’re playing great defenses that are coached very well and can disguise thing. He wins in Tennessee, and then couldn’t function in an offense against Buffalo, playing a great defense.”

DeCosta and the Ravens are certainly in a bind when it comes to determining Jackson’s value. Jackson is prolific but he has an MVP trophy on his resumè to accompany a 31-8 regular-season mark.

Yet would DeCosta and the Ravens have to worry that they’d be merely paying to be in the mix rather than on the podium with Jackson leading them?

“They can take care of him, and be fine,” the executive says. “There’s restructuring, you can get all that stuff done … But, do you want to get it done? Do you want to make him the highest-paid player in your franchise’s history, and think that he’s going to take you to the Super Bowl and win it?

“Because, in my opinion, he’s not. He’s a great dude. I have nothing against him, but I’d hate to be in Eric DeCosta’s position and have to pay him.”

A star has been [re]born in Los Angeles.

Matthew Stafford has lived up to, and exceeded the hype that preceded his Tinseltown arrival. The former Lions star quarterback has supercharged the Rams’ Super Bowl chances, along with his own MVP candidacy, while leading Los Angeles to resounding victories over the Chicago Bears and Indianapolis Colts to open the season.

“I’ve been saying for years, and people scratch their head, Matthew Stafford is an elite quarterback,” Mark Schlereth told me during a recent appearance on FanSided’s The Matt Lombardo Show podcast. “Who has played in a horrible, let’s just call a spade a spade, he’s played in a horrible organization that didn’t know how to win, that didn’t understand how to build a culture, or how to build a football team around him.”

That culture, and the scheme to maximized Stafford’s gifts were waiting for him to touch down at LAX, long before he even threw his first touchdown pass in a Rams uniform.

Through the first two weeks of the season, Stafford has completed 69.6 percent of his passes for 599 yards with five touchdowns to just one interception, en-route to a 127 passer rating.

Put it simply, Stafford has been terrific.

The 33-year-old is in the midst of one of the more dominant stretches of his career. Stafford is currently top-10 in the league in both passing yards and touchdowns through two weeks. But, the infrastructure of head coach Sean McVay’s scheme might just be the key that has unlocked Stafford’s success.

“But, all he really wants to do is beat you over the head with the running game.”

Even after losing Cam Akers for the season to a torn Achilles tendon during training camp, and now Darrell Henderson’s status uncertain for Week 3 due to a thumb injury, McVay’s power-running attack has perennially fostered a next-man-up philosophy that is already shining through.

Los Angeles’ ground game hasn’t yet shifted into overdrive, but is averaging just over 87 yards per game and produced two scores.

If Henderson can stay healthy, he’s averaging 4.2 yards per carry through two games, and elevate his game in coming weeks, look out for Stafford and the Rams in what might be the most competitive division in football.

The Lions never committed to the running game during Stafford’s tenure in Detroit, only Reggie Bush and Joique Bell even surpassed 800 rushing yards. Back in 2013 and ’14.

By contrast, only five active players have been asked to throw more often than Stafford’s 6,280 passing attempts.

It’s nearly impossible in the modern NFL to win without even the threat of balance. Something Stafford never had the benefit of. Until now.

We’ll learn much more about Stafford and the Rams in coming weeks, as Los Angeles enters a gauntlet of the Buccaneers (home), Cardinals (home) and Seahawks (road).

If Stafford and the Rams come out of that stretch 2-1 or better, they’ll find themselves in all likelihood in the West’s driver’s seat, and it’s difficult to imagine their newfound franchise quarterback won’t be a pivotal reason why.

“Matthew Stafford is going to be phenomenal,” Schlereth says. “And the Rams are a legit Super Bowl contender.”

“I’m definitely trying to get it. I was getting held but I did as much as I could, slap his arm. As soon as I slapped it, I saw the ball on the ground. I was like, ‘It’s time. Get that ball, we’re trying to win the game.’”

Oweh made two of the biggest defensive plays of the young season, and what might prove to be two of the most impactful in an AFC race to home-field advantage that now has no clear favorite and even less margin for error.

Even before Oweh punched the ball out of Mahomes’ hands with 1:20 remaining to seal the victory, the former Penn State standout forced a bit of history.

Mahomes had never thrown an interception in the month of September. That is, until Oweh ran the Chiefs’ all-world quarterback down from behind, forcing him to throw the ball into trouble, where it was intercepted by Tavon Young. Five plays later, Lamar Jackson plunged into the end zone, Ravens pull to within 35-30, and the comeback was on.

Multiple scouts and executives, who spoke to FanSided this spring, had first-round grades on Oweh, despite the fact that he did not produce a sack his senior season in Happy Valley.

Eric DeCosta and the Baltimore Ravens stuck by their convictions in their evaluation of Oweh’s 4.36 speed, 34.5-inch arms, and immense athleticism, and chose Oweh with plays like Sunday night’s in mind.

Pro Football Focus gives Oweh an 80.4 overall grade through two weeks and lists him as the outlet’s highest-graded rookie edge rusher. If that trend keeps up, Oweh is going to reward DeCosta and the Ravens’ faith in him in spades.

According to WynnBet, the Washington Football Team are 10-point underdogs in Buffalo against the Bills. Buffalo certainly has the more talented and explosive roster, but Washington has been battle-tested over the past two games, falling to Justin Herbert and the Los Angeles Chargers, 20-16 and then edging out the Giants 30-29 on Thursday Night Football.

Meanwhile, Josh Allen doesn’t look right. The Bills’ franchise quarterback has tossed three touchdowns to one interception, seems to have regressed, completing just 56 percent of his passes through two weeks, and failing thus far to surpass 300 yards passing in a game. Buffalo ran past Miami, but Tua Tagovailoa was knocked from the game in the first half after bruising his ribs.

The Bills should improve to 2-1, but it’s almost impossible to imagine Washington’s defense letting this one get out of hand.

The Buccaneers might be the NFL’s most complete team, but we’re about to find out over the next five weeks just how high Tampa Bay’s ceiling is in 2021.

Tom Brady has wedged himself once again into the MVP conversation, tossing nine touchdowns through the Buccaneers’ season-opening victories over the Dallas Cowboys and Atlanta Falcons, just as Todd Bowles’ swarming defense enters Sunday having already produced four interceptions and a pair of sacks.

Rightfully so, after returning all 22 starters from last year’s Super Bowl championship team, the Buccaneers entered 2021 as prohibitive favorites to repeat.

But, the next five games might be the most grueling test the Buccaneers will face on their run to SoFi Stadium.

Sunday, the Buccaneers head west to the site of this year’s Super Bowl and face what could be an NFC Championship preview against Stafford, Jalen Ramsey, Aaron Donald and a Rams team that has outscored opponents 61-38 over the first two weeks.

Next, Brady returns to Foxboro, where Bill Belichick will obviously have a game-plan as capable of taking down his former pupil as anyone is capable of constructing.

Throw in a home date with the Dolphins before a clash with an Eagles defense that boasts a dominant front seven, in front of a fully-lathered Philadelphia crowd on a short week.

If somehow the Buccaneers make it through the next four games unscathed, running the table remains a possibility.

Given the defenses that lay ahead for the Buccaneers, we’re about to find out if anyone in the league is capable of slowing down Brady and his bevy of weapons.