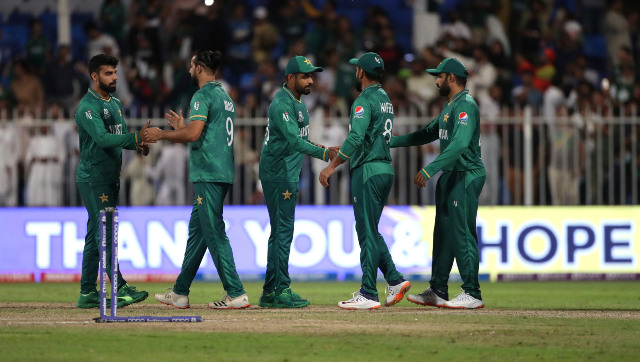 Full toss by Cummins, Rizwan flicks it. Maxwell dives near the boundary but can’t stop the ball touching the rope.

Hazlewood gets his length wrong in the first ball and Rizwan says thank you with a six. Much better lengths in the next few deliveries. The fourth ball is a slower one, Rizwan tries a similar swivel but gets beaten. Babar then plays the cut, gets an outside edge and the ball goes to the short third man fielder on one bounce. Nine off the over.

Wow! Rizwan plays his trademark shot. Not exactly a slog but he picks the length early and sends the ball over deep square leg for a maximum.

Pat Cummins prefers to bowl straight in his first over. Goes a tad short in the second ball and pays the price against Babar who plays a lovely flick off his hips. The Aussie pacer comes back well after the boundary. Six off the over.

Cummins bowls short and straight, Babar flicks and finds the gap. The Pakistan skipper has been timing it really well today.

This time Babar sweeps and he gets the boundary. 10 off Maxwell’s first over but he almost got a wicket.

Rizwan comes down the track to Maxwell, takes the aerial route but doesn’t time it that well. Warner is running back from mid-off and gets to the ball but can’t hold on to the catch. Great effort but they would’ve loved the wicket.

Josh Hazlewood has been among wickets so he’ll try hard to break this stand. Once Rizwan and Azam get going, Pakistan have a solid chance to put up a good score on board. One boundary in the over, five off this one.

Super shot. Babar Azam special cover drive. The ball from Hazlewood swings away late but the Pakistan skipper is not troubled. Times it perfectly.

Starc starts with a fuller, outside off-stump delivery. Rizwan goes for the drive, the ball swings back in late as the batsman gets an inside edge. Wade dives to his right but can’t stop the single. Good-looking flick by Two good-looking shots by Babar but they go straight to the fielders. First one goes towards square-leg and the next one is cut-off by the point fielder. Rizwan faces the final ball, he tries the slash but gets beaten. Six off the over.

Pakistan have cruised to the semis with five wins by playing an equal number of games. They are the only unbeaten side in the tournament. They are riding the crest of a wave having beaten almost every team comprehensively. A big factor heading into such crucial games is momentum and confidence. Pakistan will have both, against Australia.

It’s been a complete team effort from Pakistan so far. Almost everyone has contributed at some point or the other. There are no glaring weaknesses as such. There are a couple of concerns though. Fakhar Zaman hasn’t had a good outing as such. He’s averaged just 13.50 with 54 runs from four innings and he would look to get up on the scoring charts. Hasan Ali hasn’t found his groove and has been Pakistan’s most expensive bowler going at 8.57 runs per over. Pakistan would hope that the duo up their game in the upcoming match.

They wouldn’t look to tinker much with the winning combination.

Australia too has had a decent campaign so far. They too have had comprehensive wins in almost all the matches.

They were thumped by England in the only match that they have lost. But it’s impressive, the way they bounced back to win against Bangladesh and West Indies to qualify for the semis.

Adam Zampa’s role in the middle overs will be crucial. He’s the joint second-highest wicket taker in the tournament and is the only one of two bowlers who has taken a five-for in the tournament. There will be battle within battles.

Here’s everything you need to know about the Pakistan vs Australia T20 World Cup 2021 semi-final in Dubai:

What is the venue for Pakistan versus Australia match?

What time will the Pakistan versus Australia match start?

Which TV channels will broadcast the Pakistan versus Australia match?

The match will be telecast on Star Sports Network.