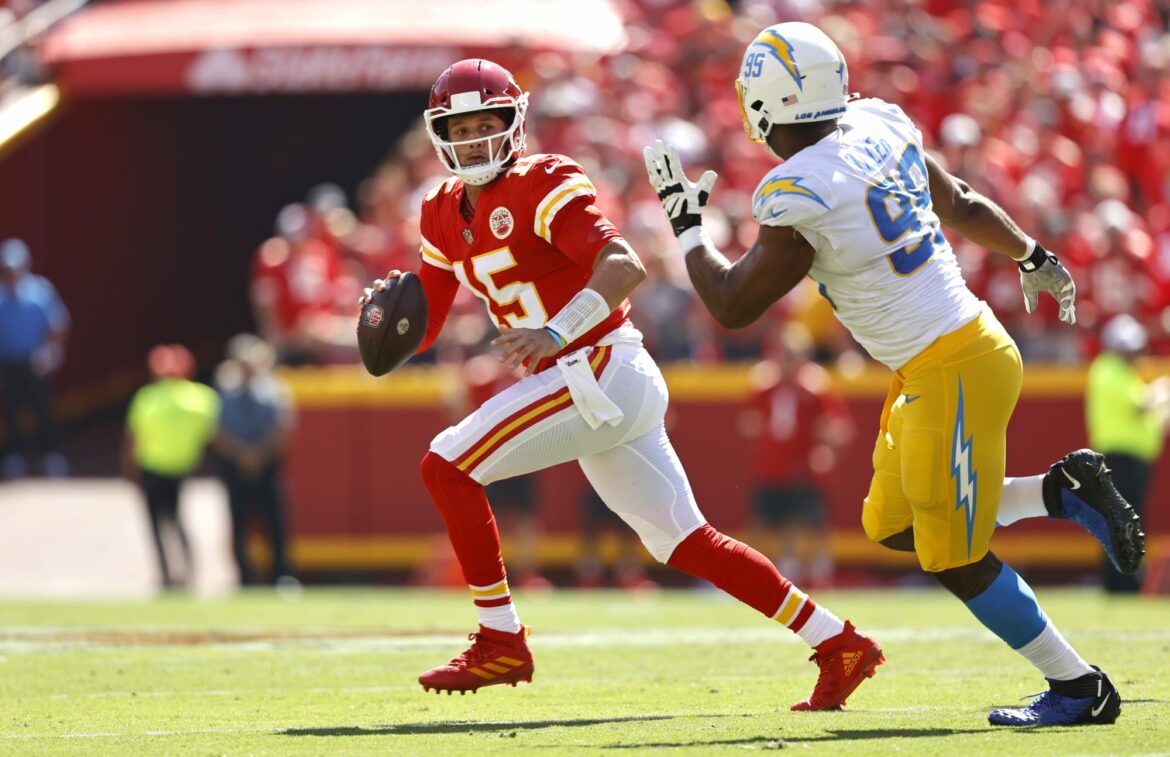 KANSAS CITY, MISSOURI – SEPTEMBER 26: Patrick Mahomes #15 of the Kansas City Chiefs scrambles and looks to avoid a sack by Jerry Tillery #99 of the Los Angeles Chargers during the first half in the game at Arrowhead Stadium on September 26, 2021 in Kansas City, Missouri. (Photo by David Eulitt/Getty Images)

The Kansas City Chiefs suffered a stunning loss to the LA Chargers on Sunday, but Patrick Mahomes knows this team will be just fine.

Don’t panic yet, Chiefs fans. That’s the message that Kansas City quarterback Patrick Mahomes has for all of you who are down in the dumps following the loss to the Los Angeles Chargers on Sunday.

The Chargers left Arrowhead with a 30-24 win, with Justin Herbert hitting Mike Williams for a late score to record the win. While KC fans are indeed upset, Mahomes knows the season is still incredibly young and the team will be able to bounce back.

The Chiefs held a 17-14 lead going into the fourth quarter, but the Chargers were able to make plays late and took advantage of a Mahomes interception to help record the victory on the road. It’s no question the biggest win of Herbert’s young career.

For Kansas City, they’ve now lost back-to-back games. Remember, the Cleveland Browns gave them all they could handle in Week 1 as well, as the AFC North squad nearly pulled off an upset themselves.

Last week, Kansas City suffered the heartbreaking loss to the Baltimore Ravens in Monday Night Football. Truly no one expected this team to be 1-2 three weeks into the season. It’s shocking almost.

With that said, Mahomes knows that this team is simply too good to keep losing. The mistakes being made will surely be corrected in the near future. Don’t worry just yet, Kansas City supporters. With Mahomes as your team’s starting signal-caller, they’re always going to be in a position to record convincing wins. The Chiefs will look to get back on track next week going up against the Philadelphia Eagles.