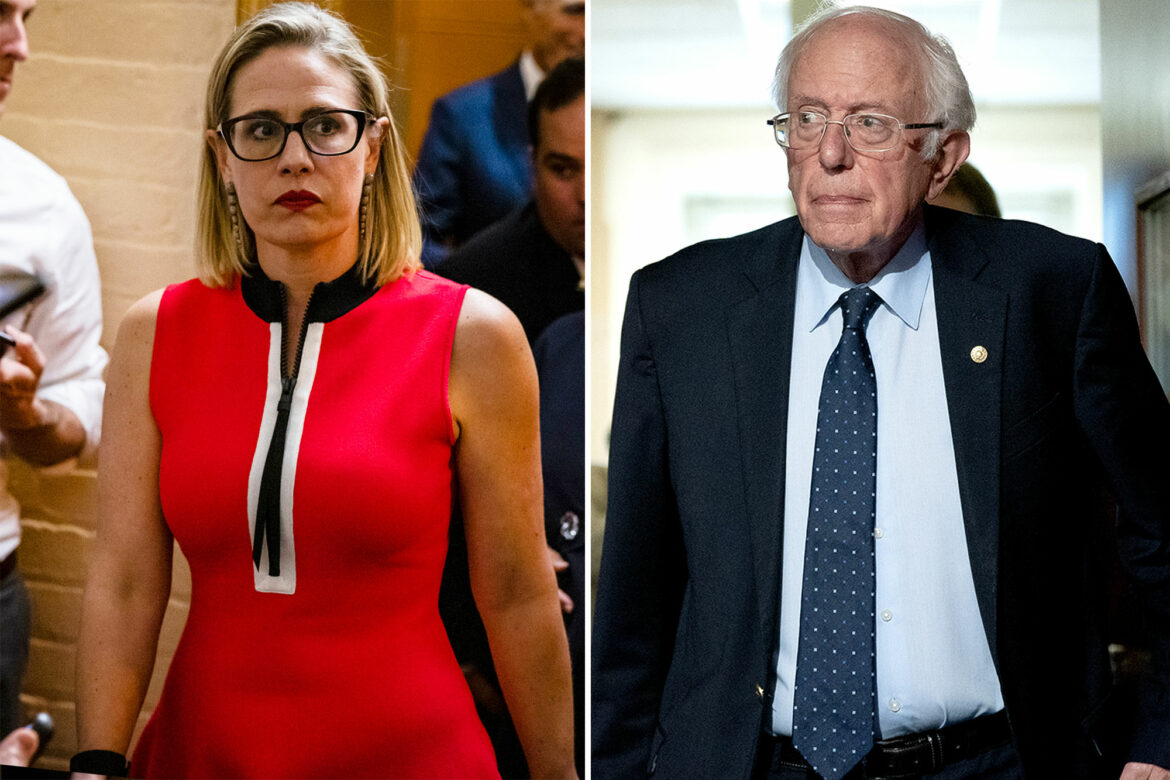 An initial Senate Democratic leadership statement was drafted Tuesday by Jeff Giertz, communications director for Sen. Cory Booker (D-NJ), in response to a Sunday incident in which pro-immigration activists disrupted a lecture Sinema was giving at Arizona State University, then followed her into a bathroom before haranguing her through a stall door to support the massive legislation.

The incident was videoed and posted to social media, causing widespread controversy.

The third paragraph of the draft statement read: “What happened in that video was a violation of Senator Sinema’s privacy that has no place in our public discourse, and we resolutely condemn it.”

In a Tuesday email exchange obtained by Axios, Sanders communications director Mike Casca suggested Giertz begin the paragraph with the words: “While we hope Senator Sinema will change her position on prescription drug reform and support a major reconciliation bill” before pivoting to the language of condemnation.

Senator Bernie Sanders, an Independent from Vermont, arrives to a news conference at the U.S. Capitol.Bloomberg via Getty Images

Moments later, Giertz responded to Casca: “Thanks for the reply. My boss [Booker] can’t agree to that edit.”

On Wednesday morning, Casca informed Giertz via email that “Sanders will not be signing, so please cut ‘Senate Democratic Leadership Team’ from the headline.”

Axios reported that the statement has not yet been published, though it has been signed by a number of top Senate Democrats, including Majority Leader Chuck Schumer (D-NY), Majority Whip Dick Durbin (D-Ill.), Elizabeth Warren (D-Mass.), and Joe Manchin (D-W.Va.) in addition to Booker.

Manchin and Sinema have both said they will not support a reconciliation bill — largely authored by Sanders — that spends $3.5 trillion, a stance that has earned them condemnation from progressive activists and members of Congress alike.

Sinema blasted the demonstrators who harassed her over the weekend, saying in a statement Monday that their actions were “not legitimate protest.”

“It is unacceptable for activist organizations to instruct their members to jeopardize themselves by engaging in unlawful activities such as gaining entry to close university buildings, disrupting learning environments, and filming students in a restroom,” she said, later adding: “My students were unfairly and unlawfully victimized. This is wholly inappropriate.”

At the White House, President Biden was more blasé about the incident, telling reporters that “I don’t think they’re appropriate tactics but it happens to everybody.”

“The only people it doesn’t happen to are people who have Secret Service standing around,” Biden added. “So it’s part of the process.”

Press secretary Jen Psaki told reporters the intrusion by the activists into Sinema’s classroom was “inappropriate and unacceptable,” but added that the administration “stands for the fundamental right of people to protest, to object, to criticize” and declined to specifically condemn Sinema being hounded in the bathroom.