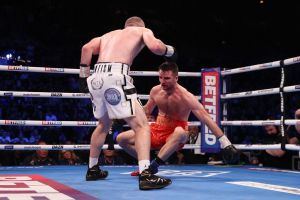 Liam Smith knew he was going to war where pride and honor were at stake. Anthony Fowler was not going to be an easy opponent, and indeed he was not; however, Smith got the better of him to score an eight round technical knockout and won the WBA International super welterweight title from him this Saturday in Liverpool.

“Beefy” had a tough loss to Magomed Kurbanov last May and taking a fight against an opponent like Fowler was quite a challenge. But he showed his resilience and his motivation to get a resounding victory despite the effort he had to put in.

The crowd was divided in heart as both fighters are from Liverpool and the frantic pace of the fight from the opening bell added to the tension in the atmosphere.

Hard combinations and exchanges were the order from both fighters and it was evident in the eyebrows of both boxers, which were showing cuts and blood early in the bout. Smith fought toe-to-toe in a very entertaining and close contest that had a turning point in the fifth round.

A spectacular short straight right hand from the 33-year-old sent Fowler to the canvas in that round and that was the exact moment when the scales began to tip in his favor. Although Fowler got up and got through the round, Smith began to get much more confident and hurt his opponent with good combinations.

Between action-packed exchanges, came a left hook in the eighth round that knocked Fowler down again and although the former WBA regional champion got back up, the referee deemed him unfit to continue and decreed victory in Smith’s favor.

Smith regained his winning ways, won an important title for him at this point in his career and improved his record to 30 wins, 3 losses, 1 draw and 17 knockouts. Fowler, who put on a great fight, but dropped his record to 15 wins, 2 losses and 12 knockouts.