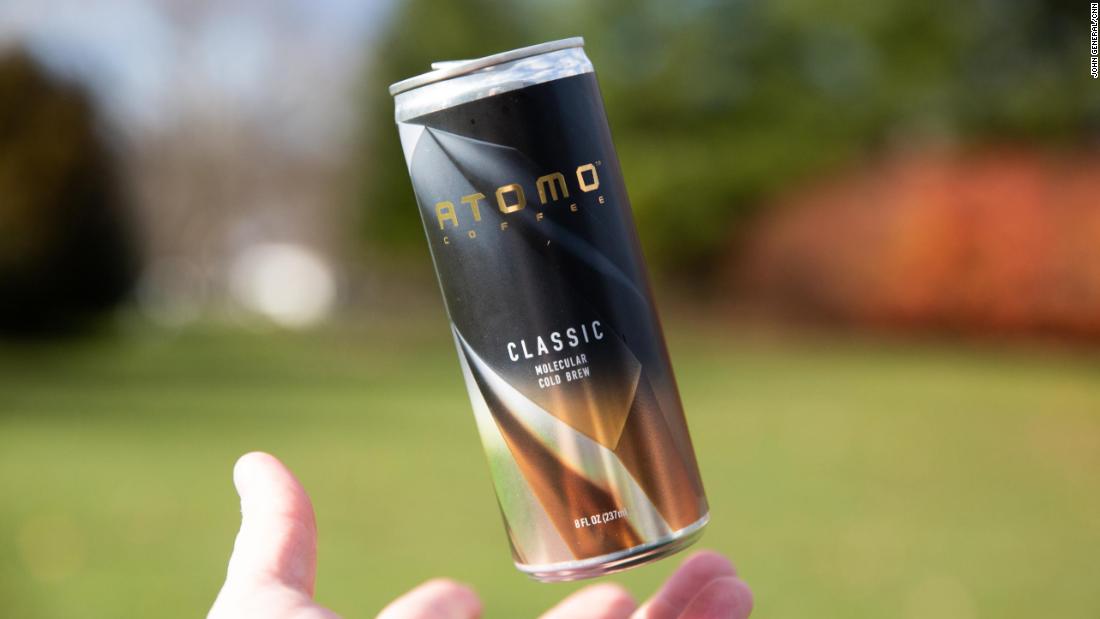 Most of these ingredients are upcycled, the company said, meaning that if they weren’t used by Atomo, they’d likely be thrown away. Date seeds, or pits, are usually “scattered in the field,” said Atomo CEO Andy Kleitsch. “We give them a second life.”

But that’s not the company’s only eco-friendly selling point. Atomo used a service called Carbon Cloud to calculate its own footprint and looked at research on coffee’s environmental impact to see how its process stacks up, Kleitsch said. It concluded that Atomo’s product uses 94% less water and produces 93% fewer carbon emissions than conventional cold brew coffee.

The company is still in its early stages. It has a Seattle-based factory that can pump out 1,000 servings a day, according to Kleitsch. Eventually, the startup would like to offer a wider assortment of products, including instant coffee and grounds. It plans to launch in retail next year.

The opportunity for a company like Atomo is big. But it will have plenty of challenges, including convincing customers of its environmental claims. Moreover, in order to get java drinkers to buy its coffee-free coffee, it will have to prove to them that it’s as good as an actual cup of joe.

Is there a market for coffee-less coffee?

Because it may end up on retail shelves next to regular cans of cold brew, Atomo could get a lift from the growing ready-to-drink coffee market which, according to Euromonitor International, hit $4.4 billion in 2021.

The popularity of plant-based protein has also paved the way for a concept like Atomo’s, said Jim Watson, senior beverage analyst at Rabobank.

Consumers might “expect companies out there to be using technology to be doing more for us,” he said, by replacing traditional products with healthier or more environmentally friendly alternatives. Someone who sees that Atomo uses upcycled ingredients might think, “I found a coffee product that fits right into these trends … I should try that,” he said, adding that Atomo has “the opportunity to potentially unlock a different consumer that was looking for something that coffee didn’t offer.”

But Atomo may not have everyone convinced of its eco-friendly premise.

Kleitsch warns that climate change and growing demand for coffee will force coffee farmers to find new land, and clear away more trees to do so.

Coffee farming has certainly led to deforestation, and there are still plenty of coffee farms that don’t use sustainable practices, noted Tensie Whelan, director of the Center for Sustainable Business at NYU Stern School of Business who previously served as president of the Rainforest Alliance.

“There are significant challenges to conventional ways … of growing coffee,” she said.

But there would be downsides to replacing coffee beans altogether, she stressed. “When grown sustainably, this is a really important source of income for local communities as well as a positive environmental benefit,” she said. Growing coffee sustainably can contribute to biodiversity, she noted, adding that “It’s overly simplistic to say that [growing coffee] always results in deforestation.”

Kleitsch agrees that there are sustainable ways to grow coffee and, because of high demand for the product, doesn’t think Atomo will box out local farmers. But he doesn’t believe that sustainably grown coffee will be enough.

“It’s going to take everyone to meet the demand for coffee,” he said. “We’re just trying to meet that demand in a way that causes the least harm possible.”

In order to really get consumers in its corner, the company will have to win on another, crucial factor: Taste.

“When we first launched, we thought that the real coffee connoisseurs would hate us, honestly,” Kleitsch said. “It’s actually been the opposite.”

CNN Business asked Tom Bomford, coffee director at the upscale New York City coffee chain Black Fox Coffee, for his take on the drink. He said he thought that Atomo’s product could indeed pass for the real thing … with a caveat.

This may not be a rave review, but the product still managed to exceed Bomford’s expectations. “If you’re into cold brew, there’s a good chance you’ll be OK with that,” he said.