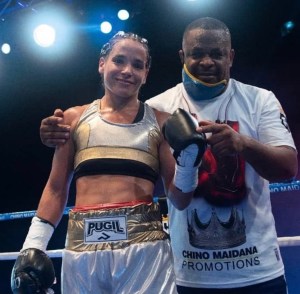 With an unblemished record, Clara Lescurat is the new WBA FEDELATIN flyweight champion. At Saturday’s event in Sabaneta, Colombia, Lescurat, from Argentina, defeated Venezuelan Yusbely Torrealba by technical knockout in the third round.

Initially, Lescurat was scheduled to face Oscarys Zarraga, but due to complications, a change of opponent had to be made.

Clara preserves in her boxing performance, that characteristic amateur punching accompanied by screams that mark the blows in speed to then step back. But she has been able to combine the aggressiveness that led her to win her first belt.

With neat combinations of crossed uppercuts and uppercut to the abdominal area, Lescurat overwhelmed Torrealba in a whirlwind of punches that led the referee to stop the actions in the third round.

The former representative of the Argentinean amateur national team, Lescurat is undefeated in 5 submissions, 3 of which were by knockout.