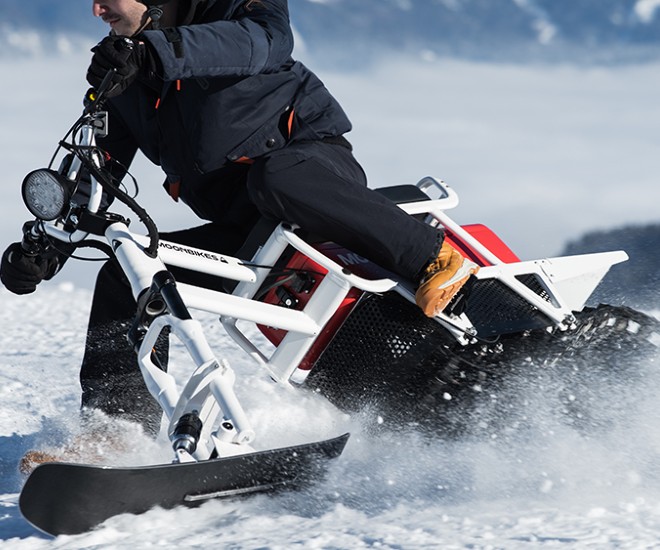 French startup Moonbikes had announced last year it was introducing an electric snowbike — a bike specifically designed to ride through the snow. Following the pre-orders, it’s been confirmed the snowbikes will reach customers by the end of Q4.

The company recently announced that 250 Moonbikes will be delivered to buyers in December of this year. The second batch of the snowbikes will be available in early 2022. Both batches are of limited quantity.

The easy-to-ride, all-electric snowbike was created by founder Nicolas Muron. The bike can climb 40 per cent slopes, support loads up to 264 pounds, and reach a top speed of 26 miles per hour.

The bikes were assembled in partnership with German engineering company, Bosch, the bikes come with their own battery and charger. Add-ons including a second battery are offered at US$1,800.

The bike might not be able to compete with a traditional snowmobile with an electric power train, it is a lot more eco-friendly, and is a lot lighter, weighing only 176 pounds which is about half of a normal snowmobile.

“After three years of research and development, and rigorous testing across the French Alps, we are proud to launch a brand-new category of vehicles, led by an innovative patented propulsion system,” says Muron in a statement. “Snow lovers now have a sustainable and silent alternative without compromising speed, price or autonomy as Moonbikes can run up to three hours with a second battery or up to 1.5 hours with one.”

With the US being the largest snowmobile market globally, the company plans to accelerate its development in the US. The team aims to hire a team to support its growth and partner with major ski resorts in the US. A similar incentive happened for Moonbikes last year, giving the startup an opportunity to partner with 12 European ski resorts to adopt snowbikes to their facilities.

With borders slowly opening up around the world, places such as Europe and the US could see an increase in travellers during the next few months, especially during the wintertime. This could present Moonbikes with a great opportunity to take advantage of the increase in travel to market to those who are looking to have some fun in the snow.

You can now pre-order your own Moonbike on its website, available in white and red. The 2022 shipment is also limited to 250 units.

If you’re looking for more electric automobiles, Rolls-Royce is releasing its own fully electric vehicle called The Spectre. The vehicle is expected to hit the market in 2024, with the company planning to go fully electric by the end of the decade.

If that doesn’t tickle your fancy perhaps owning a miniature Cadillac Seville would be more interesting. Gucci and Hot Wheels teamed up to bring a 1:64 scale of the iconic Gucci Cadillac 1979. Fastest fingers first as models are limited to 5,000 units.