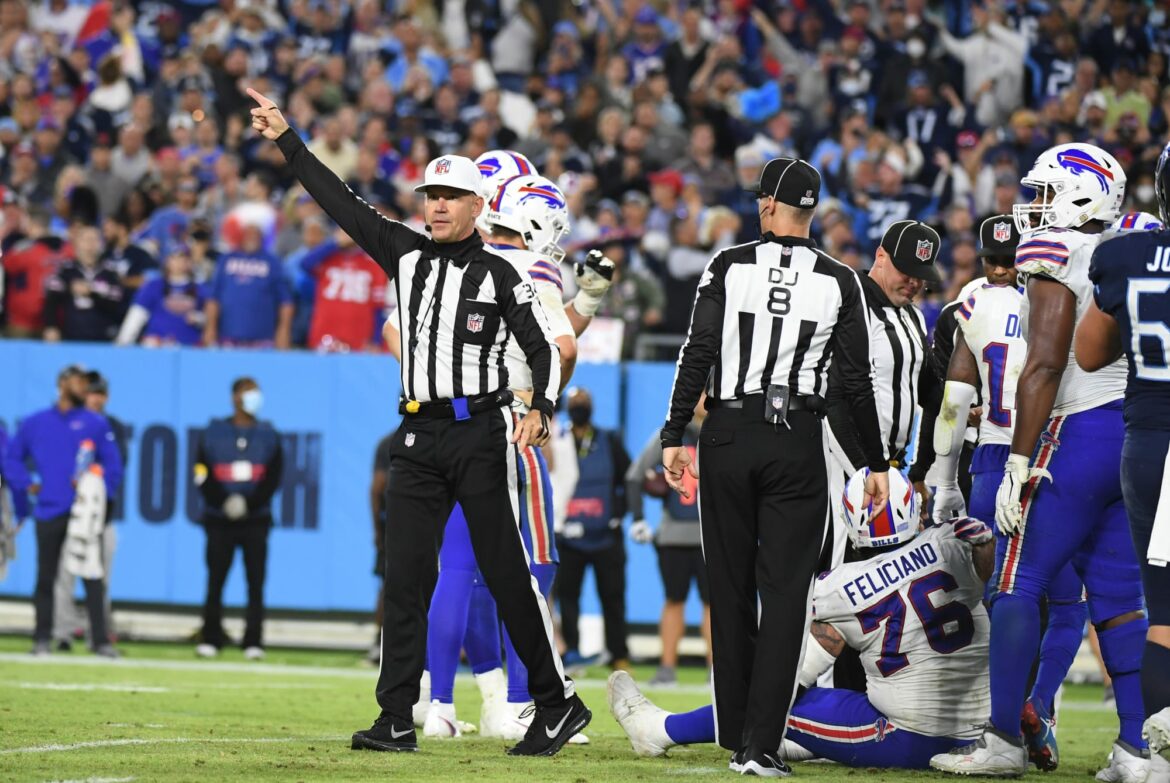 NFL officiating has been under heavy fire this year from media and fans alike, but after talking to several people in the know, the fix isn’t an easy one.

In Week 3, the play clock hits zero with Baltimore’s Lamar Jackson in shotgun. Nearly two seconds elapse before he takes the snap.

Officials throw no flag for delay of game. Instead, Justin Tucker bounces a record 66-yard game-winning field goal off and over the crossbar. Detroit fans double over in despair.

In Week 8, Cleveland’s Jordan Elliott launches himself into Chris Boswell’s helmet on a pass attempt, leaving Pittsburgh without a kicker while Boswell suffers a concussion. No penalty is called. Officiating analyst Gene Steratore said it should have been a 15-yard roughing the passer infraction.

In Week 9, taunting is called against Buffalo’s Mitch Trubisky, who isn’t even at the stadium after being put on the Reserve/COVID-19 list. The ref soon corrects the mistake by announcing it’s against Jacksonville’s No. 10. Two plays later, the referee announces an unnecessary roughness penalty on Jacksonville who line up to punt. After officials stop play for several minutes, the referee announces the penalty is against Buffalo.

Like its players and coaches, who are the best in the game, NFL officials will always make mistakes. Each week, fans see rulebook flubs like granting consecutive timeouts, inconsistency on roughing the passer and other subjective calls, and this year, in particular, discussion-less officiating huddles that disrupt the game flow.

“I watch the games now and I’m frustrated,” says Jim Daopolous, a former NFL official who moved into the NFL office as a supervisor of officials in the 2000s. “They’re trying to learn on the fly and it’s having an effect on the competency.”

Nobody says officials have an easy job. And the scrutiny of these seven-person officiating crews has intensified with fans around the world seeing replays within seconds on social media.
Daopoulos, who officiated for two decades, including 10 years of NCAA football, before he earned an NFL position, says the NFL’s problem is too many officials with minimal experience.

“People always ask me, ‘How do they catch the quick toe-tap on the sideline?’” says Daopolous, who compares the speed of the NFL game to watching a train go by. “Well, they see it 1,000 times.”

More than a quarter of the NFL’s 121 officials – 33 – have less than five seasons under their belt. A dozen officials are in their first or second season.

Ben Austro is the creator of Football Zebras, a website that offers expert analysis and coverage of NFL officiating, and he echoes Daopoulos regarding the inexperience of NFL officials. Austro, points out an accepted rule-of-thumb that it takes NFL officials five years of game experience before they’re up to full speed. Austro, who has studied officiating closely since requesting a rulebook from the NFL in 1988, says the quality of the officiating hasn’t risen to match the increased scrutiny.

Several recent retirements, some pandemic-related, have resulted in high turnover and the need for new hires, but Austro says the crucial training needs to happen five years before officials reach the NFL.

Neither the NFL nor the NFL referees’ association (NFLRA) replied to interview requests for this article. During the season, the NFL doesn’t allow interviews with current officials apart from the referee, a crew’s head official, addressing pool reporters in post-game press conferences.
Both Austro and Daopoulos say the NFL once had an ideal training ground for officials in NFL Europe, which folded in 2006 because it was losing money.

There, the game’s speed came close to the NFL, with more than 100 players and several officials eventually landing in the big leagues after honing their craft. Daopoulos supervised officials for NFL Europe and recruited those who not only had good on-field mechanics and rule expertise, but also were team players that liked using feedback to help improve.

Steve Freeman got his start in NFL Europe and worked as an NFL official for 20 years until retiring before this season. Even before officiating, Freeman had seen the speed of the NFL game first hand, as a standout defensive back for Buffalo and Minnesota until 1987.

“Officiating was definitely harder than playing,” Freeman says. “You don’t know what’s going to happen until it happens.”

To account for the uncertainty of not being in the huddle for play-calls, Freeman would do everything possible to make sure he didn’t make a mistake on gameday. He says 85 percent of the job is mental preparation. First, there’s the rulebook, which Freeman says requires year-round study and passing a written test in the offseason. In the time leading up to gameday, instead of studying the opposing team’s offense as he did when playing, he needed to learn the offense, defense and special teams for both teams.

When leaving the stadium, officials get a thumb drive with the recorded game to review. They spend hours watching every play and consulting with their crew and supervisors about their performance and how to improve. Oh, by the way, there’s also the travel.

During the season, officials can work as much as 60 hours a week, Daopoulos says, and that it’s easy for supervisors to spot those who put in the prep time.

Freeman, who was part of the NFL’s experiment with full-time officials from 2017-19, says he can only imagine the challenge officials who held down other jobs faced on Monday mornings. Some officials are self-employed or work in industries that allow reduced hours during the season, yet others are school teachers, sales managers and a supervisor of a city’s building safety.

Many fans complain about officials having other careers, comparing NFL officials to the full-time staffs of the NBA, NHL and MLB. Unlike the other pro sports, the NFL’s offseason is longer than the regular season. And there are generally only two games a week outside of Sundays.

While Freeman says the real reason the NFL doesn’t hire full-time officials is to avoid paying for health insurance, neither Austro nor Daopoulos believe full-time officials would result in marked improvement. Austro says the pool of talent would shrink if officials were forced to give up other employment for an NFL officiating position that risks injury or could be short-lived if you’re not good enough. On the flipside, he acknowledges an official’s other work could prevent them doing the travel that might be necessary to move up the officiating ranks.

Daopoulos doesn’t believe fair compensation is the issue either. He says he helped push for officials to earn more money for officials during a collective bargaining agreement. Officials could start out making nearly $200,000 and earn as much as $300,000 for half a year of game work.

Officials who receive playoff assignments earn more. Officials are graded on every play based on an evaluation system started in the 1990s by officiating pioneer Art McNally, who recently became a Hall of Fame candidate. Officials fall into three tiers based on the grades, with the highest tier selected for the playoffs.

Austro says some officials can become so obsessed with the grading system that to avoid making an incorrect call they huddle and wait for a call from the instant replay booth. Daopolous believes replay can be a helpful tool, but says the increased dependence on it hurts the game-watching experience for fans left watching an official playing with their earpiece.

Meanwhile, at the NFL offices in New York, there’s also been significant turnover among the top brass of officiating.

“It will now presumably be up to Anderson to handle both on-field and replay officiating, and ultimately reducing the available time to develop and train newer officials that the officials union specifically bargained for,” Austro wrote in an August 30 article for Football Zebras.

Austro has also written in recent years about the NFL curtailing the in-season involvement of a team of respected former officials who would travel to games to offer mentorship, and says it might take time for the NFL to adjust to new leadership in supervisory roles. In the meantime, he says the league needs to maximize mentoring opportunities. For instance, making sure to pair an inexperienced down judge with a veteran side judge.

Daopoulos says the best NFL officials treat their crew as a second family.

“You live and die with them every week,” he says.

Daopoulos says becoming a close-knit group leads to that coveted experience. Newer officials must learn the philosophy of being an NFL official. It’s what Daopoulos calls “in the margins,” referring to meetings in which officials write down how to interpret a rule in the margins of the rulebook. For instance, for offensive holding, officials will learn to call a flag only if they see a “twist” or “dip of the shoulder.”

Over time, game-day experience will help officials learn to better communicate with players and coaches. Without strong communication on the field, officials can lose control of the game.

“Some of these officials become robots out there,” Daopoulos says. “I’m not sure if they’re afraid or what.”

One official who doesn’t appear afraid is Tony Corrente, who recently drew attention for a possible hip check on Chicago Bears linebacker Cassius Marsh before calling a taunting penalty. Austro says Corrente, who recently turned 70 and is the NFL’s oldest on-field official, an example of experience resulting in a highly-graded official who isn’t necessarily too old for the job. The NFL needs to find the delicate balance of experience and up-and-comers, Austro says.

Currently, the NFL has a development pipeline that includes more than 20 NCAA officials, who work games that include showcases in the Senior Bowl, East-West Shrine Game and NFLPA Collegiate Bowl. Austro says the NFL should also look for more talent in lower college divisions, including Historically Black Colleges and Universities (HBCUs), as well as in the soon-to-be resurrected XFL.

As for this NFL season, officiating crews are set.

“There is no minor league to pull from for the NFL,” says Austro.

Only once in recent years has the NFL fired an official during a season. So how well will NFL fans tolerate current officials learning on the job? We already know the answer to that question. Daopoulos says America’s most popular sport will always generate a higher standard.